Why is this a priority?

Underage marijuana use has both negative consequences for the individual and high socioeconomic costs to society. Preventing or delaying the onset of underage marijuana use is associated with positive outcomes, such as improved school performance, reduced youth delinquency and positive mental health.

Students who use marijuana often have difficulty learning, remembering, and problem-solving. These students are more likely to skip school, get lower grades and are less likely to graduate. Marijuana use among 10th graders is nearly three times that of the percentage who smoke cigarettes; and nearly one-half of 10th graders report that it is easy to get marijuana (Source: 2016 Healthy Youth Survey [HYS], February 2017).

The current impacts of recreational marijuana legislation (Initiative 502) are being monitored and outlined in a report issued by the Office of Financial Management’s Forecasting and Research Division: (Source Monitoring Impacts of Recreational Marijuana Legalization).

We monitor 10th grade marijuana use at the state and local level to understand the implications of policy changes on adolescent drug use over time.  The data also provide an indication of statewide prevention strategy effectiveness, and help to determine the need for additional investments as statewide trends change and local high need communities are identified.

How are we doing? 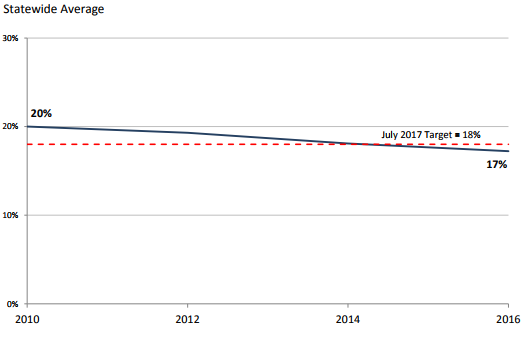 With the passage of Initiative 502, the bill legalizing recreational marijuana, we expected to see changes in marijuana use patterns. Marijuana use is leveling off while the use of other drugs is declining in the State of Washington and nationally.

Although the 10th grade trend in Washington is gradually improving, it still remains above the national average of 16.6%.

What are we working on?

How can you help?

Reported by: Department of Social and Health Services