Why is this a priority?

Underage drinking has both negative consequences for the individual and high socioeconomic costs to society. Preventing or delaying the onset of underage alcohol use is associated with positive outcomes, such as improved school performance, reduced youth delinquency and positive mental health.

The age of first use and frequency of use of alcohol is linked to adult alcohol dependence. Reducing alcohol use among 14-18 year old's will likely result in future medical, criminal justice, and productivity cost savings.

We monitor 10th grade alcohol use at the state and local level to understand the implications of policy changes on adolescent alcohol use over time.  The data also provide an indication of statewide prevention strategy effectiveness, and help to determine the need for additional investments as statewide trends change and local high need communities are identified.

How are we doing? 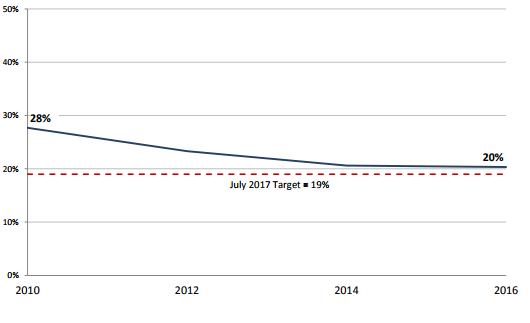 With perception of harm data we want to see an upward trend. The 2016 Healthy Youth Survey (HYS) data demonstrate that youth in Washington report they understand the risks and harms involved with drinking once or twice a day. Washington data is better than the national data in this regard.

Despite the reduction in its use, alcohol still remains as the number one drug of choice when youth choose to use substances.

During the two years following the implementation of alcohol privatization in Washington State (as a result of the passage of Initiative 1183 in 2011), we observed (Source: Julia Dilley, 2016):

What are we working on?

How can you help?

The Start Talking Now website provides information for parents and community members about the risks of underage drinking and proven ways we can help more teens.